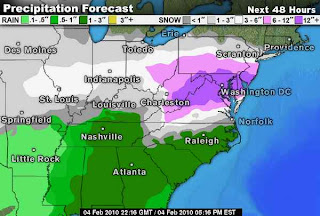 Midnight Update: Unofficially, Jackson received at least another 0.57" before midnight, which would break the daily record. An additional 1.20" at Meridian pushed that total over 2". Gulfport MS got 2.26" in 6 hours. The total at New Orleans was also over 2". Mobile AL had 1.76" in 6 hours.

Original post:
The storm system now developing along the western Gulf Coast has prompted widespread Winter Storm Warnings through the Mid Atlantic region and even a Blizzard Warning for the New Jersey and Delaware coasts. Precipitation amounts can't be taken too literally, since precipitation is the most difficult of the various meteorological parameters to forecast, but model forecast accumulations have continued to increase. This afternoon's output from the GFS model, for example, shows total liquid precipitation amounts (in the dark red area) from 2.5"-3" through much of Virginia and the southern half of Maryland.

Rainfall reports today from the Gulf Coast indicate that this is indeed a very moist system. The National Weather Service office in Jackson, Mississippi said this afternoon: Preliminary daily climate reports in the region show heavy rainfall amounts, although it appears that no records have been set so far. Some daily precipitation reports through 4 pm CST include (record amount in parentheses): Images (click to enlarge): Precipitation forecast for 48 hours ending Saturday afternoon, Feb. 6, from The Weather Channel; GFS model precipitation forecast for 60 hours ending 1 pm Sunday, Feb. 7
Posted by Steve Scolnik at 6:01 PM

If this storm is not breaking records down there, how can we expect to have 2.5" of liquid up here? Heck, we average 2.6" or so for the entire month of february. Is NWS seeing DC/MD/VA as the bucket emptying point?

Is there a site that can show how much liquid we're getting from this storm in a real-time basis? Not snow, but liquid. I am in N. VA (arlington). Thanks for the blog.

It's very unlikely that DC would get as much as 2.5" of liquid, but it should still be very wet. As far as the southern amounts are concerned, those only went through 4:00, and it was still raining pretty hard down there. I'll try to make an update with the final totals.