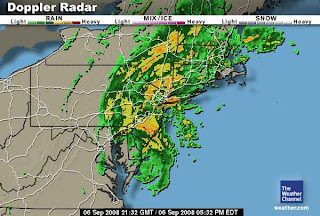 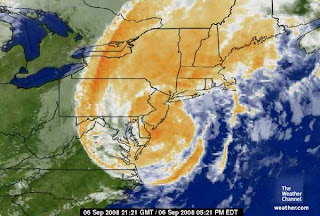 5 pm Update: At 5 pm, Tropical Storm Hanna was centered near Cambridge, Maryland on the Delmarva peninsula. Hanna continues to race off to the northeast at 28 mph. Rain has mostly ended in the Washington, DC metro area, but heavy rain continues from extreme northeastern Maryland through eastern Pennsylvania, New Jersey, southern New York and into New England.

Reconnaissance has shown that Hurricane Ike is back to extremely dangerous Category 4 with maximum winds of 135 mph. Ike is continuing to move toward the west southwest at 15 mph. A Hurricane Warning is in effect for portions of the Bahamas, the Turks and Caicos, and eastern Cuba. Although Ike could still threaten southern Florida, it's looking increasingly likely that the storm will move on past Cuba into the southeastern Gulf of Mexico.

2 pm Update: The center of Tropical Storm Hanna has now moved to near Williamsburg, Virginia, approaching the lower Chesapeake Bay. Maximum winds are still 50 mph, and the storm is moving northeast at 25 mph. Little change in strength is expected today, but Hanna will be losing tropical characteristics by Sunday.

Based on aircraft reconnaissance reports, Hurricane Ike has regained Category 3 strength with winds of 115 mph. Ike continues on a west southwest track at 15 mph, heading toward the Turks and Caicos and the southeastern Bahamas. Ike is a fairly compact storm, with hurricane force winds extending outward up to 45 miles and tropical storm force winds up to 125 miles.

Original post:
After making landfall near the North Carolina/South Carolina border around 3:20 am, Tropical Storm Hanna is rapidly moving up the U.S. East Coast. At 11 am, the center of Hanna was near Emporia in southern Virginia. The storm is moving north northeast at an accelerating rate of 24 mph. This track will take the storm to the vicinity of southern New England by tonight and the Canadian Maritimes by Sunday night.

Maximum winds are down to 50 mph, but tropical storm winds extend as far as 200 miles from the center, with the strongest winds in the eastern portion of the storm. A Tropical Storm Warning extends along the Mid Atlantic coast to southern New England. Warnings and watches, including Flash Flood Warnings, have been issued for the local areas affected.

Hurricane Ike has been lowered to a Category 2 storm with maximum winds of 110 mph as it continues moving west southwest toward the Bahamas, with a turn more toward the west expected on Sunday. Ike is then expected to pass near or over the northern coast of Cuba, eventually reaching the Gulf of Mexico. Although fluctuations in strength are likely, Ike is expected to regain major hurricane status in the next couple of days.

Tropical Storm Josephine was downgraded to a depression Friday night, and the last advisory was issued for the storm early Saturday. Maximum winds are down to 30 mph, and further slow weakening of the remnants is expected over the next two days.