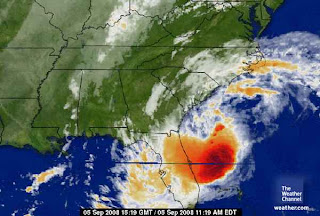 Watches and Warnings from Southeast to Mid Atlantic

11 am Update: The Tropical Storm Warning for Hanna has been extended northward and is now in effect from Altahama Sound, Georgia all the way to Sandy Hook, New Jersey, including all of Chesapeake Bay, the tidal Potomac, Washington, DC, and Delaware Bay. Local watches and warnings have been issued by National Weather Service offices in the affected areas.

Although Hanna is looking better organized, maximum winds remain at 65 mph. Movement is toward the north at 20 mph from a position 375 miles south southwest of Wilmington, North Carolina.

Meanwhile, Ike and Josephine have both weakened slightly. Ike's forecast path has been shifted a little to the south, which could bring it around the southern tip of Florida into the Gulf of Mexico. However, there is still a lot of uncertainty in the track.

Original post:
Tropical Storm Hanna is accelerating toward the Southeast U.S. coast this morning. Maximum winds remain at 65 mph. The center of Hanna's broad circulation was about 425 miles south of Wilmington, NC at 8 am, headed northwest at 18 mph. The track is expected to turn more toward the north today, along with an increase in forward motion.

Tropical storm watches and warnings and a hurricane watch are in effect for a large portion of the Southeast and Mid Atlantic coasts from Georgia to New Jersey. Although Hanna could become a minimal hurricane before landfall, that is increasingly unlikely.

In the Mid Atlantic region, Maryland, DC, and Virginia governments responded to flash flood and tropical storm watches with emergency preparations for the expected heavy rain and wind. This provoked the usual asinine commentary from the anonymously ethereal rabble.

Hurricane Ike continues to be a major storm, although it has dropped a notch overnight to Category 3. Maximum winds are 125 mph. Although some weakening is forecast in the short term, Ike should still be a major hurricane as it approaches the Bahamas and then possibly southern Florida, Haiti, or Cuba.

Tropical Storm Josephine remains weak, but maximum winds are up a little to 50 mph.