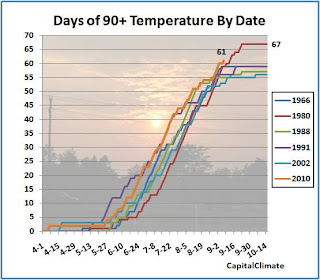 5:30 PM Update: The preliminary high/low temperatures for Sept. 7 are 94/69. If the low holds through midnight, the first week of September will average nearly 6° above the long-term mean.

Temperatures at other major regional reporting locations were also 90° or above; 91° at Washington Dulles and 90° at Baltimore/BWI.
Posted by Steve Scolnik at 2:56 PM