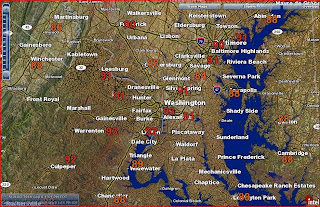 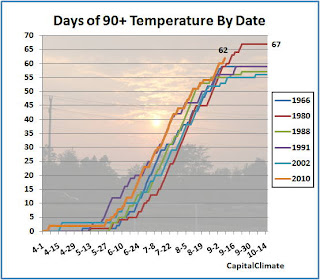 8 PM Update: And 96° it is, at 3:46 PM EDT. Temperatures were 90° or above for 8 consecutive hours beginning at noon. The low of 74° is no slouch either, just 2° below the record highest minimum for the date, if it holds through midnight. That certainly looks feasible, although temperatures will be dropping quickly. Overall, at this rate, the day is adding 12° of surplus over the long term average.

5 PM Update: The temperature was 95° for 3 consecutive hours; that's probably good enough for a high of 96°.

Original post:
That crashing noise around noon today in the Washington metro area was the sound of temperature forecasts busting as the mercury once again reached 90°. It rose 3 more degrees in the following hour to 93°. This is now the 62nd day of 90°+ temperatures in 2010. Although that is still 5 days ahead of the torrid pace toward 67 days in the record-setting year of 1980, temperatures will drop to more seasonable levels for at least the rest of the week, and 2010 may, for the first time all year, drop behind the record pace.