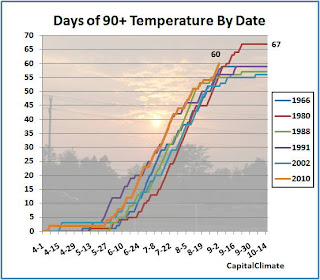 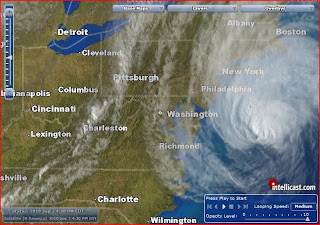 5:30 PM Update: The preliminary daily climate report shows the high/low as 91/77. All 3 days so far this month have been at least 10° above the long-term average. The low, if it holds through midnight, will be only 2° lower than the all-time September highest daily minimum set on this date in 1993.

Original post:Despite a high overcast from the far outer fringes of Hurricane Earl, the Washington temperature reached 90° at 4 pm today. This was the 60th day of 90° or higher temperatures at Washington in 2010, and it was achieved 6 days before the same number was reached in the record year of 1980. This puts 2010 in sole possession of second place for total 90° days in a year, behind the 67 of 1980. Today was the 6th consecutive day of 90° temperatures.