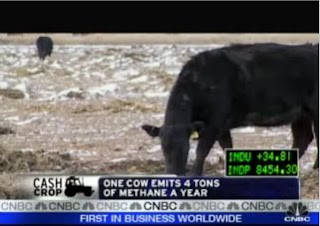 One of the favorite complaints of climate change skeptics is that talking about the possible effects of global warming is "alarmist." The skeptics aren't averse to using some scare tactics of their own, however. An example of this is the persistent claim that carbon regulation would cripple the dairy and cattle industries by taxing bovine emissions. That piece of b.s. has just been disingenuously echoed this morning by climate skeptic Roger Pielke Sr. in his Climate Science "blog" (more of a soapbox, really, since comments from the unwashed masses aren't allowed):
"A Carbon Tax For Animal Emissions - More Unintended Consequences Of Carbon Policy In The Guise Of Climate Policy"

This kind of ex-urban myth was even peddled for laughs by the usually business-like CNBC on a slow pre-holiday show:
"Getting Wind of a New Tax"

If the skeptics were really so skeptical, maybe they would check to see if such odd-smelling rumors were true. Hello, anybody out there heard of a thing called The Google on The Internets? A quick check shows that at least some in the press are actually still doing journalism. Case in point, the Kansas City Star, from Dec. 16:
"EPA calls talk of a tax on cow flatulence a bunch of hot air"

"This is a great example of Internet viral folklore," he said. "But there’s not a whiff of truth."

Posted by Steve Scolnik at 9:29 PM