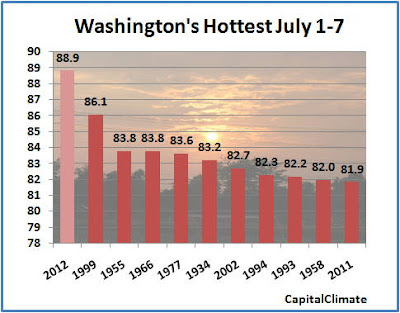 Original Post:
The record high temperature of 104° so far today breaks the record of 102° set just 2 years ago and marks the third consecutive day with 100°+ temperatures in Washington. Along with the morning low of 82°, this virtually guarantees that the current week will close out as the hottest July 1-7 in Washington weather records. Since data collection began at or near the current National Airport location in 1929, the previous hottest first week of July was in 1999, when the average was 86.1°. Assuming no further change in today's readings, the 7-day average will be 88.9°. This is 7° above the pace of last year's all-time hottest month. In order to avoid breaking the weekly record, today's low would have to drop to at least 46°.
Posted by Steve Scolnik at 1:21 PM