It's a Fivepeat for Chicago: Over 80° for 5th Consecutive Day 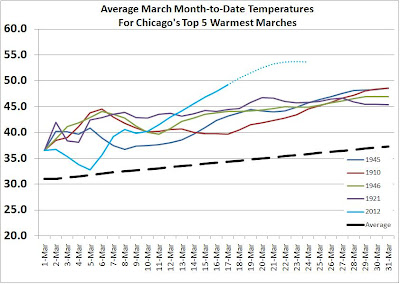 The graph above, from the National Weather Service, shows how far beyond the previous warmest Marches this month has been to date.

The National Weather Service reports that this breaks a century-plus record by over a month for the earliest string of 4 consecutive days with 80° temperatures or higher: Original post:
After hitting 80° or higher for a record-breaking 3 consecutive days, Chicago has reached that temperature again this afternoon. For the last 2 hours, the temperature has been at least 81°. The regional weather map (click to enlarge) for 3 pm CDT from the College of DuPage shows 80° or higher temperatures throughout most of central and northern Illinois, southern Wisconsin, and Iowa.
Posted by Steve Scolnik at 4:25 PM