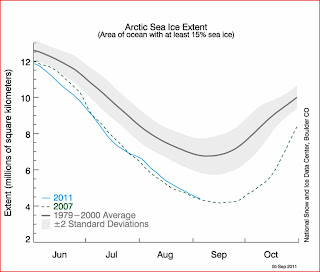 Posted by Steve Scolnik at 4:28 PM

It looks like all those who say the ice was recovering from the 2007 decline are disappointed.

The ice may recover some next year, or it may not. At this point I Would not be surprised if we saw an 'ice free' arctic by 2020.