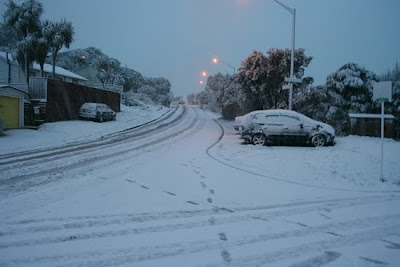 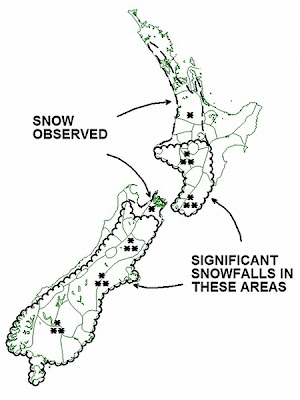 In Christchurch some snow is falling off and on across the city with heavier falls well inland. Weather analyst Richard Green says there have been a few power outages too across Canterbury as a result of the snow.

WeatherWatch.co.nz says the temperature right now in Christchurch is 2 degrees with a wind chill of minus 4.

But, despite the snow flakes, conditions are generally improving.

The intensity of the showers has significantly eased across more than 80% of New Zealand and while sleet and rain/snow showers are continuing to affect some coastal parts of Canterbury the centre of the storm is moving away.

Head weather analyst Philip Duncan says the centre of the low is now 2500kms south east of Christchurch and moving eastwards away from New Zealand. He says a secondary low will form just east of the Chatham Islands tomorrow causing conditions to linger a little longer. "The main event has well and truly passed now but we're still being affected by the tail end, so more heavy snow down to a few hundred metres from Canterbury to Hawkes Bay and wintry, sleety, conditions to sea level".

He says the secondary low won't add too much more to the weather here but will just keep "today's weather in place until Thursday".

In Wellington the snow level has lifted but a gale force southerly continues to blast through. It's currently 7 degrees with a feels like temperature of zero in the wind.

In Auckland a thin veil of high cloud and a fairly light southerly are the only signs that a winter storm was nearby.

By the weekend the large high partially responsible for the winter blast will move in and settle across New Zealand for the first half of next week.

WeatherWatch.co.nz says by the end of next week temperatures will be back to average or even above average if a warm northerly air stream from the sub-tropics eventuates. This is currently being predicted by some long range models - we'll keep you posted! 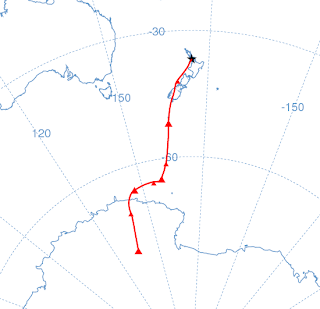 Original post:
A very strong outbreak of Antarctic air, which began moving into New Zealand on Sunday, has produced unusually widespread snowfall which the official New Zealand MetService has called a once-in-50-year event. The influx of a deep layer of cold air flowing almost directly from the Antarctic continent over much warmer sea water allowed the development of heavy "ocean effect" snow showers.

The weather map to the right shows a very strong 1034 mb high pressure area pumping cold air counter-clockwise from Antarctica to New Zealand. (New Zealand is located in the lower left of the map, with the high centered to the south. Antarctica is near the center of the lower part of the map.) The red line on the lower map shows the trajectory of air arriving at Auckland on August 15.

The 3 to 5 cm. of snow which fell above an elevation of 100 meters for at least an hour late Sunday afternoon was characterized as the "heaviest and most widespread snowfall in Wellington City for at least 50 years." Wellington is located on the southern end of North Island.

Although temperatures have been cold for this event, they have not been widely extreme. The 8.1°C high at Auckland Airport on Monday was an all-time record low maximum, but official climate data began there only in 1966. The 4.6°C at Christchurch Airport, by contrast, was exceeded in July 2007. At Waiouru, elevation about 2700 feet, the Monday low of -7.7°C was a new monthly record for August.

[H]eavy snow is likely to set in again across Wellington tonight as the snow returns to the city this afternoon.

The late afternoon surge, which WeatherWatch.co.nz predicted this morning, has seen the temperature plunge to 1 degree with a wind chill of -5.

Head weather analyst Philip Duncan says the snow will spread across the lower North Island again but may not affect quite so many main centres to the north west of the city. "Snow is expected to be heavy around Wellington, Upper Hutt and Wairarapa tonight with a moderate risk of snow flakes returning to low levels of the lower North Island like Wanganui and Taranaki".

Mr Duncan says the heavy snow in Wellington is likely to come and go all night with snow easing tomorrow morning. Snow will move into Hawkes Bay and Gisborne region too, to 100 or 200 metres.

Meanwhile Christchurch and other coastal parts of Canterbury could see more snow tonight. Weather analyst Richard Green says snow showers may return to the city tonight, but should ease in the early hours of Wednesday. Snow isn't expected to be as heavy as it was yesterday with passing snow flurries. However he says the city is definitely 50/50 for snow. "The freezing level has lifted just enough so that Christchurch, Timaru and Ashburton are all on the borderline of snow. It's an extremely fine line between sleet, rain and snow for those centres tonight but we don't expect the falls to be long lasting and heavy as they were last night".

Snow has already started to melt and turn to slush with rain showers and sleet today in the garden city.

In Dunedin a few brief snow flurries are possible but conditions there should be easing further as we head into Wednesday.

And Auckland's chance of seeing snow is quickly fading. A large shower this afternoon saw graupel and sleet in some areas while snow was confirmed on the tops of the Waitakere Ranges this morning in to around 300m from a passing snow shower.

See the New Zealand Herald for a video gallery of the snow in Christchurch.