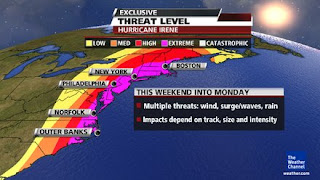 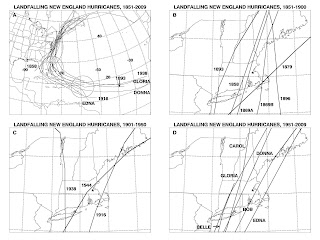 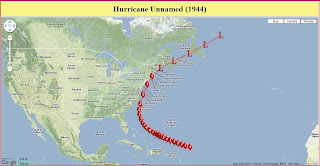 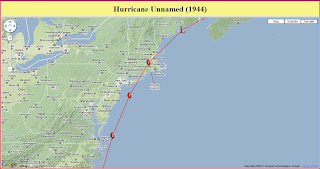 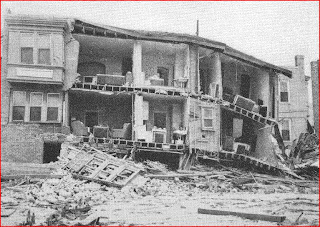 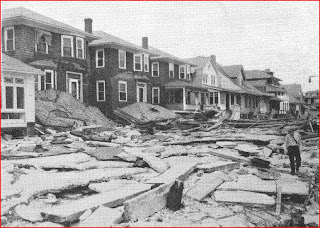 As the forecast path of an intensifying Hurricane Irene has veered northeastward toward Long Island and New England, it has invited comparisons with the Great Hurricane of 1944. The extended forecast discussion on Tuesday from the NWS Hydrometeorological Prediction Center said: The 1944 storm, first detected as a fully developed hurricane northeast of the Windward Islands on September 9, skirted the coast near Cape Hatteras before making landfall over eastern Long Island, passing over southeastern New England, and moving along the coast of Maine as an extratropical storm. At its maximum intensity, it was a Category 4 storm east of the Bahamas, diminishing to Category 1 at landfall.

The Monthly Weather Review describes the aircraft observation of the storm on the 12th east of the northern Bahamas:

A weather officer aboard an army reconnaissance plane which became involved in the storm estimated the wind at about 140 miles per hour. He reported turbulence so great that with the pilot and copilot both at the controls
the plane could not be kept under control, and several times it was feared it would be torn apart or crash out of control. When they returned to base it was found that 150 rivets had been sheared off on one wing alone.

Although the Great Hurricane remained offshore before reaching Long Island, it brought very strong winds and heavy rainfall to the Mid Atlantic coast. Highest winds at Cape Hatteras were 110 mph, and the barometer reached 947 mb (27.97 inches of mercury). As the storm moved east of Norfolk on September 14, the highest wind speed downtown was 73 mph, gusting to 90 mph. The 3.97" of rainfall set a record for the date which still stands. The lowest barometric pressure at Norfolk was 985.7 mb (29.11 inches of mercury). The sustained wind speed of 134 mph at Cape Henry in Virginia Beach was an all-time Virginia state record.

Inland, precipitation amounts were much lighter. Both Washington, DC (2.51") and Baltimore (3.15") set still-standing daily records from a stalled frontal system on the 13th, when the storm was still off the coast of Georgia, but received only token amounts from the hurricane itself (0.19" at Washington, Baltimore not available).

Further north, there was considerable damage along the New Jersey coast (see photos), although the center of the storm remained offshore. The University of Rhode Island Graduate School of Oceanography reports:

During the storm, New York City saw sustained hurricane force winds of 130 km/h (81 mph) with gusts up to 158 km/h (99 mph). Damages consisted of power outages, some lasting 10 days, and downed trees throughout the city. In nearby Long Island, damages totaled $1 million (1944 USD) on the eastern half of the island alone. The beach eroded up to 6 m (20 ft) in some places, causing houses to be taken by the sea. In Connecticut, the most significant storm impact was the heavy, widespread rainfall. Totals of around 178 mm (7 in) were seen in the Hartford area, but the city of Bridgeport saw the greatest official total at 272.8 mm (10.7 in). Tobacco and fruit damage in Connecticut totaled to about $2 million (1944 USD) with similar overall damage costs occurring in Rhode Island. Greater than $5 million (1944 USD) in damage done on Cape Cod can be attributed to lost boats, as well as fallen trees and utility damage.

Wind records to date were set at Atlantic City (91 mph from northeast), New York (99 mph), and Block Island (88 mph from southeast). The 3.94" of rain on the 13th and the 3.82" from the hurricane on the 14th combined to help make the month the 4th wettest September at Central Park, New York.

Total storm damage was estimated at $100 million, equivalent to roughly $1.2 billion in current dollars. Considering the limitations of observational and warning technology, the death toll from the storm on land was relatively low at 46. However, loss of life was much higher at sea, particularly in the early stages of the storm. Despite being warned that it was steaming directly into the hurricane, the destroyer USS Warrington (DD 383) lost power and sank on the 13th:

The water rushing into her vents caused a loss of electrical power which set off a chain reaction. Her main engines lost power, and her steering engine and mechanism went out. She wallowed there in the trough of the swells - continuing to ship water. She regained headway briefly and turned upwind, while her radiomen desperately, but fruitlessly, tried to raise HYADES. Finally, she resorted to a plain-language distress call to any
ship or shore station. By noon on the 13th, it was apparent that WARRINGTON'S crewmen could not win the struggle to save their ship, and the order went out to prepare to abandon ship. By 1250, her crew had left WARRINGTON and she went down almost immediately, stern first.

Out of the ship's complement of 20 officers and 301 men, only 5 officers and 68 men were rescued. Two Coast Guard cutters, a minesweeper, and the Lightship Vineyard Sound were also sunk by the storm.