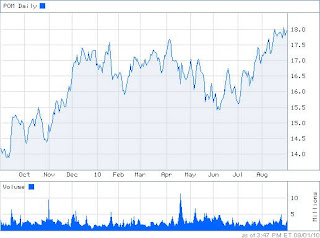 Original post: Last night was the last straw. I was waiting for the midnight (standard time) report to confirm the final record-breaking summer average temperature for Washington when the electricity went out (again).

It doesn't take a power systems engineer to determine that Pepco has fundamental problems with reliability of its electricity grid. It's not the trees! Our subdivision, which was built in 1968, has totally underground utilities. Last night was the second time within about 6 weeks that we've had a multi-hour outage completely unrelated to weather.

In July, we had a 4-hour outage the weekend BEFORE the major storm. The day of the storm, I was watching radar at the time it was approaching. The power went out before the core of the storm reached us. There were no trees down in the neighborhood, but we were out for 21 hours. Friends in an adjoining subdivision, which has above-ground utilities, were out for only a couple of hours.

Last night, after a completely calm day, the lights went out with no warning about 11:50. The entire subdivision with underground power was dark, but I could see the street lights from the above-ground lines 2 houses up the street. The Pepco automated outage reporting system at first gave no estimate of repair time, then 6 am, 4 am, and 2 am. A Pepco truck arrived about 12:30, reset the transformer directly across the street from my computer room, and the lights came back on shortly after the truck had left. After I went through the lengthy process of rebooting the computer and logging back online, the power went out again and didn't come back until about 1:15 or 1:20.

It seems pretty obvious that Pepco has made an economic decision to favor outage reaction over outage prevention. It certainly must be cheaper than upgrading or replacing deteriorated and unreliable 40-year-old infrastructure to instead send out a truck and minimal crew to drive around a neighborhood for a couple of hours of overtime setting and resetting circuit breakers when the system fails repeatedly. As a business decision, that seems to be working for them, since as I write this, their stock is hitting new 52-week highs:

On the other hand, this is not working for customers. It's more than an inconvenience; it's an economic and potentially a public safety issue. I've already taken advantage of the Constellation Electric fixed-rate electricity supply offer, even though I think dropping natural gas prices will lower Pepco's exorbitant rates in the next year. At least it sends a signal. The only further actions I can think of are to spend upwards of $10K on a full-house generator or multiples of $10K on a solar photo-voltaic system.

There must be a solution that is less burdensome on the customer, however. Since Pepco is a monopoly, the only solution is to make it too expensive to continue this policy. I propose the following:
- Establish a level of acceptable service. Given that this is now the second decade of the 21st century, a late 20th century concept of Six Sigma would seem appropriate. This is 3.4 defects per million, or about 1.7 minutes of outage per year per customer.
- If any segment of the system fails to meet the standard, the company should be required to pay a fee at least equal to the cost of replacing the failing segment.
- If the same segment fails again within a year, the company executives and board of directors should be personally liable to pay the fee.

Yes, the system is vulnerable to weather, but this is not the only place in the world where electricity coexists with trees. Pepco's business decision to trade off repair and recovery costs against reliability and redundancy results in far too much collateral damage when there is a storm. The pictures of tree damage in limited areas like Gaithersburg, White Oak, and Silver Spring were very dramatic, but there were nowhere near 300,000 trees down. Yet, 300,000 customers were without power, many for days.

The existence of repeated non-weather-related outages proves that Pepco's attempts to shift the blame from its own system mismanagement are phony.

Some solar power vendors offer a lease of their equipment with free installation. Solar City is one such company. You might look into it.

Interesting economics, although with interest rates essentially 0%, I'm not sure lease is preferable to buy. Do you have any personal acquaintance with the product?

Hm, nifty calculator; you can pinpoint your actual roof on the map. However, I get:
"SolarCity does not currently service the area you entered, but is expanding quickly to new regions."