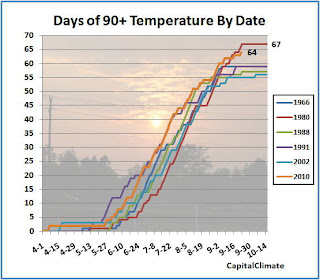 5:30 PM Update: The preliminary high temperature is 95°, just 3° below the daily record and 18° above the average for the date. With the low of 67°, the day is 13° above the climatological average.

Other regional high/low temperatures: The high at Dulles ties the record set in 1970 and 1980.

Original post:
By 3 pm today, the temperature at Washington reached 91°, making this the 64th day of 90° or higher temperatures this year. The high so far today is the 93° reading at 4 pm.

Meanwhile, the 94° so far at Richmond and 95° at Raleigh have further extended their already broken records. This is now the 7th day of 90°+ temperatures at Raleigh out of the last 9 and the 13th in September overall. It's the 8th day this month at Richmond.