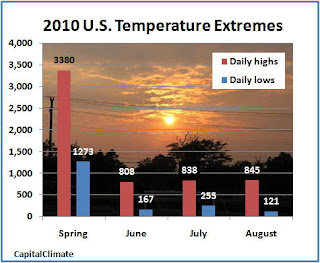 With a little over a week left in August, U.S. daily maximum temperature records are outpacing minimum records by the torrid pace of 7:1. NOAA's National Climatic Data Center reports that through Sunday, August 22, a total of 845 daily high temperature records have been set in the 50 states, more than in all of July. Meanwhile, the number of low temperature records is only 121, less than half of the July total.

Posted by Steve Scolnik at 5:54 PM