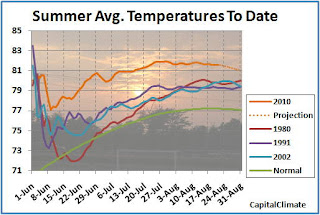 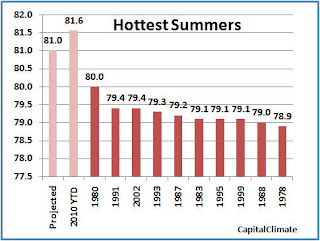 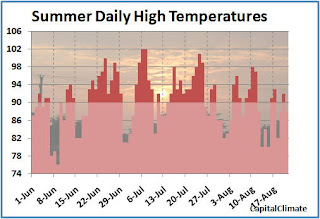 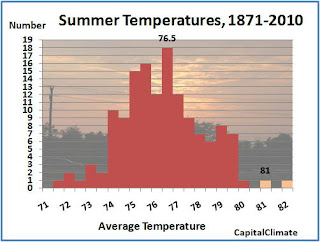 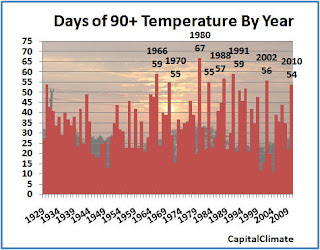 Original post:
Today's preliminary high of 88° and low of 77° average out to 6° above the long-term normal.

The summer average temperature of 81.6° continues well above the all-time record hottest summer of 80.0° in 1980. If temperatures for the remaining 9 days of August merely equal the long-term average, the final summer average will be 81.0° (up from 80.8° last week). This is a full 1° above the old record, a margin equivalent to the difference between the current record and the 9th hottest summer.

The histogram of summer temperatures shows how far this year deviates from the past 140 years of records. Each bar shows the number of summers with average temperatures within 0.5° intervals. The 2 light orange boxes on the far right of the chart show the current season average to date and the projected result based on average conditions for the rest of August.

The August average of 80.9° is unchanged from last week's value. Although not a record, if it were to hold, it would be the 6th warmest August on record.

So far this season, the only days failing to reach 80° or higher were the 7th, 8th, and 9th of June, so today is now the 74th consecutive day of 80°+ temperatures. The latest forecast indicates that this string could break on Tuesday with a high of 76°. Although the current record summer of 1980 finished with a strong run of mid and upper 90s, it had already seen 2 days in August below 80° by this date.