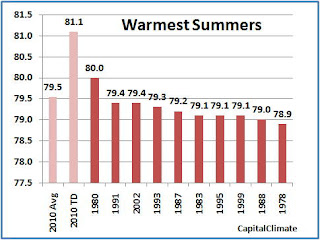 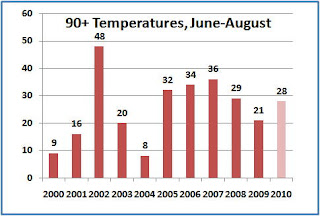 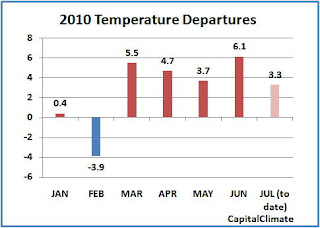 The summer heat is being reflected in local residents' air conditioning bills. Today's 23 cooling degree days are over 50% above the average for the date. For the season to date (since June 1), they are slightly over 40% above average. Here are the daily, monthly and seasonal degree days and excess over normal: Images (click to enlarge): Washington, DC summer average temperature to date and projected based on historical average vs. top 10 warmest summers; August 2010 temperature forecast from Climate Prediction Center; Number of 90° or warmer days, June-August, 2000-2010; 2010 monthly average temperature departures from normal; CapitalClimate charts from National Weather Service data, unless otherwise noted
Posted by Steve Scolnik at 4:38 PM