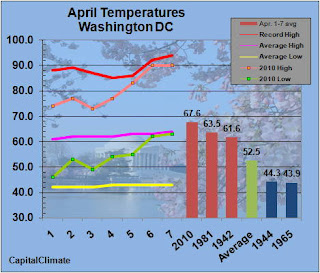 April 8, Midnight update: The midnight (1 am, EDT) lows: April 8, AM Update: This morning's low of 69° is 9° above the record warm minimum for April 8. In the unlikely event that this reading were to hold through the approach of a strong cold front this evening, it would tie the all-time April warm minimum on April 19, 1896.

5 PM Update: Today's high of 90° brings the average for the first week of April up to 67.6°, over 4° above the old record. Other highs, including a new record by 7° at Dulles:2 PM Update: As of 2:00, the highs are (new record at Dulles): Original post:
Following a low of 63°, the Washington, DC noon temperature is now up to 79°. This clinches a record high average temperature for the first week of April since at least 1930, when records began at or near the current location of National Airport. With an expected high in the upper 80s, the average for April 1-7 will be close to a remarkable 4° above the previous record in 1981.

For previous history, see the earlier post below.
Posted by Steve Scolnik at 12:33 PM