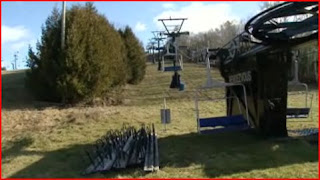 Toronto finished November 2009 without as much as a trace of snow. That's the first time in 70 years of official records that there has not been any snow in November. Unofficial records indicate that this may have broken a 162-year record. Average snowfall in Toronto for the month is 8 cm. (3.2").

Light snow was observed this morning from 3 to 5 am at Toronto's Pearson Airport.

Image (click to enlarge): Ski slope at Dagmar Ski Resort east of Toronto on November 30, from CTV
Posted by Steve Scolnik at 3:55 PM