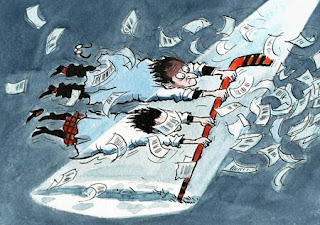 The American Meteorological Society (AMS) has issued a statement in response to the recent deniosphere blog storm over the theft and distribution of emails and documents from the Climate Research Unit (CRU) of the University of East Anglia. The AMS reaffirms its commitment to its Statement on Climate Change, originally drafted in late 2006:

It was developed following a rigorous procedure that included drafting and review by experts in the field, comments by the membership, and careful review by the AMS Council prior to approval as a statement of the Society. The statement is based on a robust body of research reported in the peer-reviewed literature.

The AMS also points out that the artificial controversy generated by the out-of-context quoting of selected emails carries virtually no weight in light of the existing body of climate science:

For climate change research, the body of research in the literature is very large and the dependence on any one set of research results to the comprehensive understanding of the climate system is very, very small. Even if some of the charges of improper behavior in this particular case turn out to be true — which is not yet clearly the case — the impact on the science of climate change would be very limited.

The University of East Anglia updated its statement on the issue on Saturday.

The Economist has an analysis of the hack in its Nov. 26 edition: Mail-strom

Dr. Jeff Masters of Weather Underground relates the hack to the mud-slinging industry in his blog: The Manufactured Doubt industry and the hacked email controversy

Image: From The Economist
Posted by Steve Scolnik at 6:29 PM