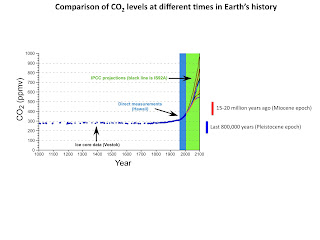 A new study published in the latest issue (October 8) of Science Express, the online version of Science magazine, has extended the history of CO2 levels back as far as 20 million years ago. The results indicate that current atmospheric CO2 concentrations of about 385 parts per million (ppm) are equivalent to the highest in that entire interval.

Previous analyses of air bubbles trapped in ice cores had shown that CO2 levels varied between 180 and 300 ppm over the last 800,000 years. The new technique uses the ratio of boron to calcium in the shells of fossil marine algae. It was calibrated by comparing its results to the measurements from ice cores. The new data show that during the Middle Miocene period from 14 to 20 million years ago, the CO2 level was around 400 ppm, very close to today's readings. The measurements have an average error of 14 ppm.

During the Middle Miocene, global average temperatures were 5 to 10°F warmer than today. Sea levels at the time were about 75-120 feet higher than today, and there was no permanent ice cap in the Arctic.

Image (click to enlarge): Atmospheric CO2 levels during the last 1000 years, the last 800,000 years, and 15-20 million years ago, compared with projections for the next century (from UCLA)
Posted by Steve Scolnik at 6:26 PM