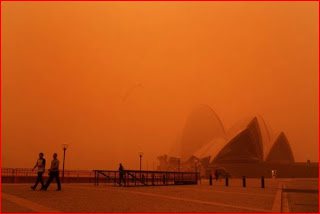 An unusually strong dust storm brought red skies and extremely low visibility to Sydney, Australia this morning. Although dust storms are fairly frequent in the Australian interior, it's very rare for storms of this intensity to reach the coast. At midday, the heavy dust cloud covered half of the state of New South Wales. The visibility restrictions caused widespread disruption in transportation systems and ferry service was suspended. Long delays occurred at Sydney Airport as Qantas flights were diverted to Brisbane and Melbourne. More than 500 fire alarms were reported between 3 and 7 am as dust particles set off detectors.

Image (click to enlarge): Sydney Opera House enveloped in dust, from Sydney Morning Herald
Posted by Steve Scolnik at 12:17 AM