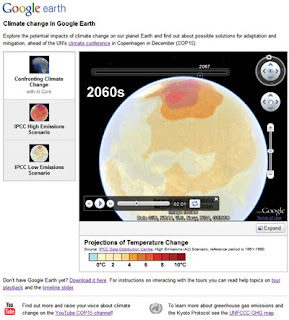 BNET reports that Google Earth on Tuesday launched a series of guided tours to provide a visualization of climate change projections. According to the official Google blog,

In collaboration with the Danish government and others, we are launching a series of Google Earth layers and tours to allow you to explore the potential impacts of climate change on our planet and the solutions for managing it. Working with data from the Intergovernmental Panel on Climate Change (IPCC), we show on Google Earth the range of expected temperature and precipitation changes under different global emissions scenarios that could occur throughout the century.

Also in cooperation with the Danish government, Google has launched the YouTube COP15 channel in anticipation of the Copenhagen climate change conference (fifteenth Conference of the Parties under the United Nations’ Climate Change Convention) to be held in December.