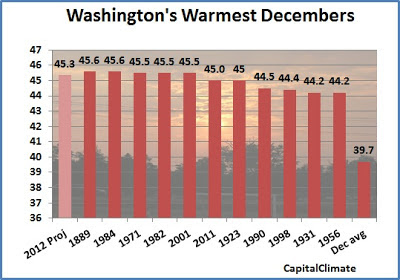 January 2 Update: Temperatures continued to exceed forecasts through the end of the month. The final average was 45.3°, which was 5.6° above normal. The 31st, at 1° cooler than average, was only the 3rd day all month with temperatures below average.

December 29 Update: Warmer-than-forecast temperatures have pushed the projected December average to 45.2°, displacing 2011 as the 6th warmest on record (chart updated).

Original post:
As of today, the month-to-date average temperature for Washington DC is a toasty (for December) 47.0°. Even with forecast temperatures averaging near seasonal normals for the remaining 6 days of the month, the projected monthly average of 45.0° should be enough to tie with last year for the 6th warmest December since records began in 1870. As noted earlier, the warm December will close out a record warm year by what is virtually guaranteed to be a huge margin.

Posted by Steve Scolnik at 6:29 PM