Spectacularly Warm Start to December in U.S.;
Above-Average Temperatures From Coast to Coast 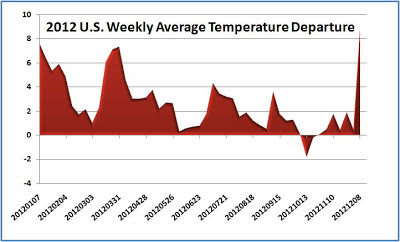 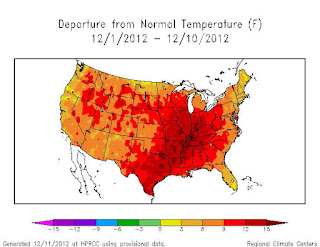 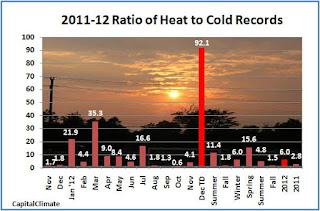 As noted last week, December got an exceptionally warm start in the contiguous 48 states of the U.S., and that trend has continued even more strongly through the first third of the month. Except for 2 weeks in October, nationwide temperatures have been warmer than average every week in 2012 and for 50 of the last 52 weeks.

For December 1-10, temperatures have averaged above normal everywhere from coast to coast. In the calender week ending December 8, of the 215 first-order National Weather Service (NWS) stations reported weekly by the Climate Prediction Center, 1 was missing (Glasgow, Montana), none were equal to or colder than average, only 1 was 1° above average (Key West, Florida), 2 were 2° above, and all the rest were at least 3° above. Over half of the reporting locations were 10° or more warmer than average, and 15 of them across 10 states (AL, AR, IA, IL, IN, KY, MO, MS, SD, TN) had departures of 15° or more for the week.

Even in a year with very warm extremes in January, March, and July, this was some serious heat. For the country overall, the average for all 214 NWS stations was slightly over 10.0° above normal, and the National Climatic Data Center (NCDC) geographically adjusted average was 8.9° above average.

Temperatures have not only been consistently warm over a wide area, but many individual locations have set records. For the first 10 days of December, new daily record high temperatures have outnumbered record lows by a ratio of 92 to 1. For the 48 contiguous states, the ratio was an incredible 132 to 1, since 3 out of the 10 low records were in Alaska and Hawaii. During the entire week of December 2-8, not a single low temperature record was tied or broken in any of the 50 states, according to NCDC reports. With 3 weeks remaining in the year, the cumulative ratio of heat records to cold records for 2012 has reached 6.0 to 1, more than double the ratio in 2011.

Looks like it's going to be a warm holiday season for everyone! Not that I'm complaining though.

The models are indicating that it's likely to be colder by the end of the month.