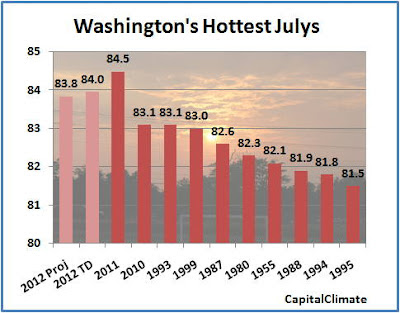 With forecast temperatures near a possible monthly record 7th 100° reading tomorrow and upper 90s on Friday, even a return to more seasonable levels by the 31st puts the projected monthly average at 83.8°, halfway between July 2010 and 2011. At this point, temperatures for all of the next 6 days would have to average at least 4° below the forecast in order for this July to drop below second place on the all-time hottest list.
Posted by Steve Scolnik at 4:25 PM