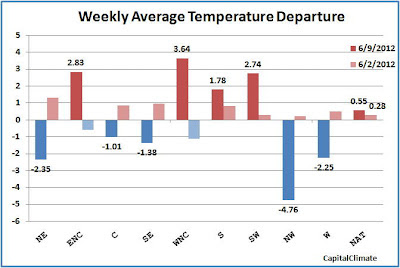 Of the 9 climate regions, 5 were below normal: Northeast (NE), Central (C), Southeast (SE), Northwest (NW), and West (W). The other 4 were above normal: East North Central (ENC), West North Central (WNC), South (S), and Southwest (SW). The coolest region relative to average was the Northwest (-4.8°F), and the warmest was the West North Central (+3.6°F). As shown on the chart, each region reversed between warm and cool in the past 2 weeks, except for the South and Southwest, which remained warm.
Posted by Steve Scolnik at 4:47 PM