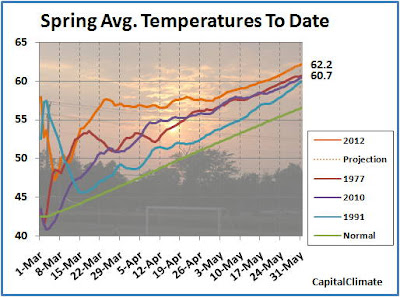 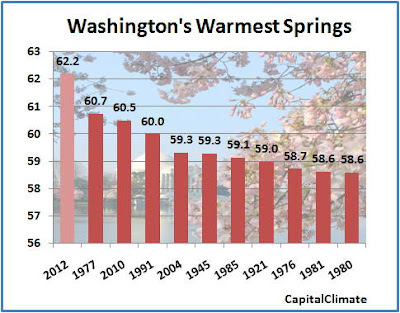 Stay tuned as we count down the record.
Posted by Steve Scolnik at 1:07 PM

Thanks a lot for compiling all of these temperature stats. One correction... I don't think the new DC spring temp record will be by an unprecedented margin. Record in 1945 was 59.3F which stood until 1977 which hit 60.7F, a difference of 1.4F. The spring of 2012 looks to exceed the current standing record of 60.7 by less than 1.4F.

Well, OK, perhaps "unprecedented" was not the best word. Except for clouds keeping the high down today (81 so far), 62.2 was in reach for the final average, which would have been 1.5 above the old record. As of now, 1.4 is most likely, which would still equal the previous difference.