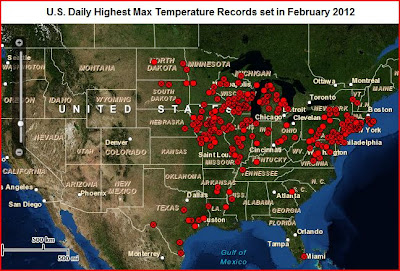 Original post:
The overwhelming ratio of daily high temperature records to low temperature records has continued from January into the first 2 days of February. Preliminary reports from the National Climatic Data Center show 176 heat records broken in the first 2 days of the month, vs. 0 cold records in the lower 48 states, plus all of 2 in Alaska. You betcha', partial-term governor Sarah Palin, it really is cold in Alaska.
Posted by Steve Scolnik at 4:11 PM