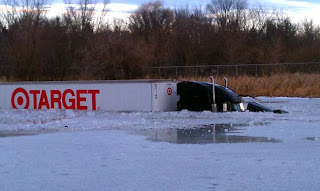 The record heat of January 5 produced the first 60° temperatures ever observed in Minnesota during the first week of January. The Minnesota Climatology Working Group reports:

The highest temperature found so far from a National Weather Service Cooperative Station is 62 degrees at Marshall. Both Milan and Madison in southwestern Minnesota both saw 61 degrees. An automated station near Canby in Yellow Medicine County reached 63 degrees. Looking back to 1891 this is the first time a maximum temperature reached 60 degrees in the state for the first week of January. St. Cloud saw a record high of 53 degrees, breaking the old record of 43 degrees set in 1984. Clouds held the temperature down in the Twin Cities and "only" had a high of 45 degrees.

The warm conditions caused a Target trailer which had veered off of highway I-94 near Monticello to plunge through the ice of a pond:
Semi driver crawls to safety as rig sinks in pond

Image (click to enlarge): A Target trailer stuck in ice after going off I-94 near Monticello, Minnesota, from Department of Public Safety, via TwinCities.com
Posted by Steve Scolnik at 12:53 PM