Midnight Update: The NWS has posted track maps for the 3 tornadoes in the Joplin area (click to enlarge): 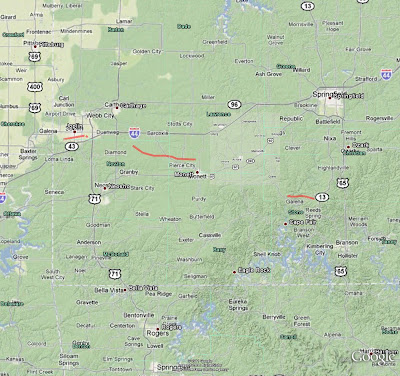 This is a closeup view of the Joplin track: 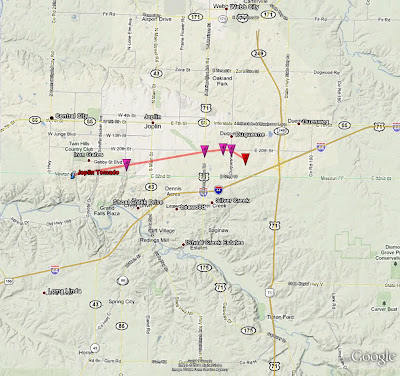 NWS summary of Joplin tornado:
9 PM Update: The NWS reports that the initial storm surveys have been completed and that there are 3 separate storm tracks: the Joplin EF-4 and Galena EF-2, as noted previously, and a second EF-2 in the Wentworth area. (Wentworth is about 30 miles east of Joplin and a few miles south of I-44). Storm track data are still being compiled.

The fact that there were 3 storms in the area shows that, as usual, Chad Myers was talking out of his, shall we say, hat, when he was babbling to the Wolfman on the CNN Situation Room that there was only 1 storm involved.

For some less hysterical video, try the PBS NewsHour coverage:

5 PM Update: The National Weather Service has just rated the Joplin tornado at EF-4 intensity: A survey has been completed for another tornado in the Galena area of Stone County, Missouri. That storm was rated at EF-2, with a path length of 7.25 miles and a path width of 1/4 mile.

4 PM Update: CNN is reporting that the Joplin tornado death toll has risen to at least 116. This exceeds the number from the 1953 storms (see below) and makes it the deadliest single tornado since 1947.

An aerial view of the tornado damage from KOTV, Tulsa, Oklahoma, is here.

USA Today has links for "How to help victims of the Joplin tornado".

Original post:
With a confirmed death toll reaching 89, the Joplin, Missouri tornado is now the deadliest since the infamous Worcester, Massachusetts storm of 1953. The previous deadliest storms: The Weather Channel is reporting that this may be at least the Deadliest Tornado Year Since 1953.
Posted by Steve Scolnik at 1:10 PM