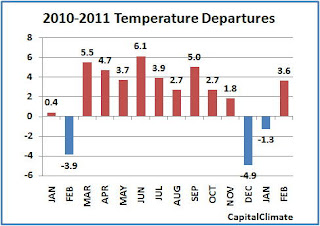 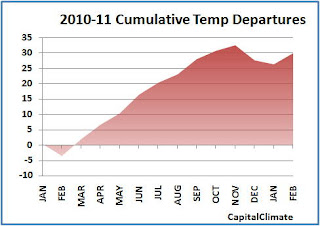 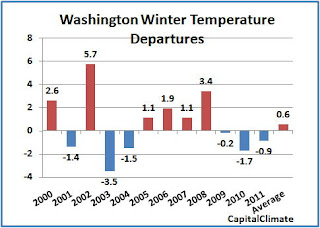 With a high temperature of 72° on Monday, February 28, Washington's meteorological winter of 2010-11 ended on a distinctly warm note. The daily high was the 4th one of the month at or above 70°. It was the greatest number of 70° days in February since 1997, when there were also 4. Despite a stretch of 5 consecutive days below average in the second week, the February average temperature of 41.7° was 3.6° above the climatological mean. Although there were 16 days with lows at freezing or below, there were no days with highs below freezing. On average, there are 17 days with lows at or below freezing and 2 such highs.

February is now the 11th month out of the last 14 with above-average temperatures in Washington, following cooler-than-normal readings in December and January. It was the warmest February average since the 42.6° in 2002. Despite the slight dip in December and January, the accumulated temperature departure since January 2010 has rebounded to 30°. Averaged over the 14-month period, that's over 2° above the climatological mean.

For the winter overall, temperatures averaged 0.9° below normal. It was the 3rd consecutive below-average winter in Washington, but 6 out of the 12 winters since 2000 have been above average, and the mean for the century to date is +0.6°.

Despite the relentless pimping of the s-word by certain eyeball-hungry local media outlets, the warm temperatures combined with below-average precipitation of 2.12" to produce a mere 0.5" of snow for the month. The greatest amount in a 24-hour period was 0.2".

As has been noted here in the past, March snow is not unheard of in Washington, with double digit amounts on a few occasions, and the all-time daily record was set as late as the 29th. Nevertheless, the current seasonal total of 9.9" of snow is 28% below the normal amount to date. A snowless March would add about another 10% to that deficit.
Posted by Steve Scolnik at 3:00 PM