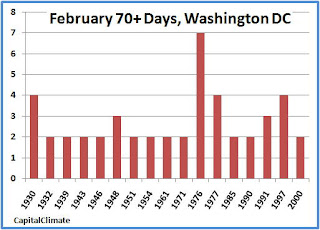 Today's high of 72° in Washington was the second this month of 70° or higher, and there's a third one on tap for tomorrow. While unusual, this event is not unique. The last time there were 2 days with 70°+ in February was in 2000. There were 4 such events in 1997.