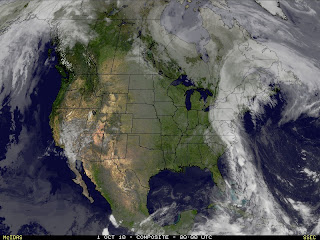 As noted in the update to the previous post, the rain has finally ended in Wilmington NC, but the flooding from excessive rainfall fed in part by the moisture from what was formerly Tropical Storm Nicole is spreading northward. Here are some highlights from the Mid Atlantic and Northeast posted in The Weather Channel's twitch stream, arranged from south to north:
Image (click to enlarge): U.S. composite satellite image at 8 pm EDT, September 30, 2010 shows moisture streaming northward from the tropics over the Mid Atlantic coast and into the Northeast, from SSEC/University of Wisconsin.
Posted by Steve Scolnik at 9:24 PM