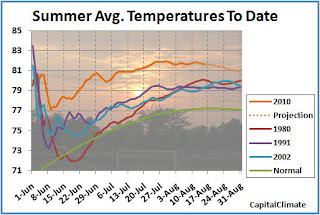 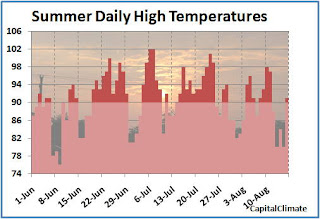 Following highs of 98° and 97° on Tuesday and Wednesday, temperatures cooled through the weekend with highs of only 80° on Friday and Sunday. These were the lowest daily highs since the temperature last failed to reach 80° on June 9. Today is the 68th consecutive day with temperatures of 80° or higher.

Overall, the August average has declined slightly from its peak to 80.9°, which is 2.4° above average. If it continues at this rate, this month will be the 6th warmest August on record. The summer average to date is 81.6°, which continues well above the previous record pace. If temperatures for the rest of the month merely equal the long-term average, the summer will still easily break the record with a temperature of 80.8°. In fact, however, temperatures in the coming week as well as into the extended range are forecast to be above average.

What's the highest dewpoint ever recorded in DC? I noticed the dew point was 76 on Monday. I thought that was excessively high, but I'm not sure. I know that our top line summer dewpoint seems to be around 65-70.

Good question.
It's bad enough when it gets to 76, but on very rare occasions, it's probably been 80 or a bit more. If I can find any instances, I'll post them.