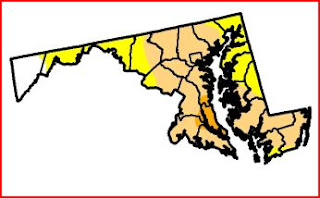 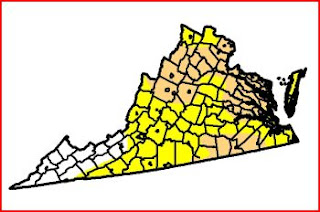 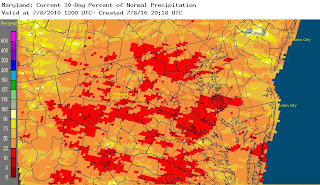 Meanwhile, today's showers have put a dent in the short-term deficit; the reported rainfall amounts: July 9 Update: WAMU reports on the effects on Northern Virginia farmers.

Original post:
Recent record-breaking temperatures have exacerbated the effects of low precipitation to produce developing drought conditions across much of the DC/Maryland/Virginia region. The latest U.S. Drought Monitor, released this morning, shows over one-third of Virginia, including all of the DC suburban counties other than Loudoun, in the Moderate Drought (D1) category. This is up from less than 1% the previous week. All of the rest of the state, except the far southwest, is at least Abnormally Dry (D0).

To the north, conditions are even more dire in Maryland, where over two-thirds of the state is in Moderate Drought (64%) or Severe Drought (4%). Nearly all of central Maryland, southern Maryland, and the lower half of the Eastern Shore are in Moderate or Severe Drought. The Severe area covers a portion of the lower western shore of the Chesapeake Bay. Baltimore City, the District of Columbia, and all of their adjacent counties are in Moderate Drought, except for far western Montgomery County.

The map of 30-day precipitation ending this morning shows virtually all of northern Virginia, DC, and Maryland with less than 50% of the normal amount. A substantial portion, probably around 50%, is in the 10-25% range (red area).

Here are the month-to-date, season-to-date (since June 1), and year-to-date departures from average precipitation through today: Images (click to enlarge): Maryland and Virginia Drought Monitors as of July 6, 2010 from CPC/NOAA; Precipitation percentage of normal for 30 days ending 8 am EDT, July 8, 2010 from National Weather Service
Posted by Steve Scolnik at 4:24 PM