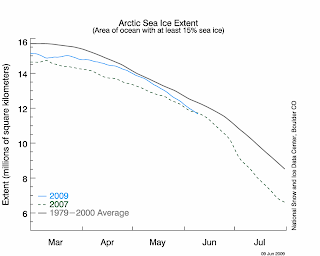 The National Snow and Ice Data Center (NSIDC) reported last week that the Arctic sea ice melt season had gained momentum in May following a slow start. (The rate of decline in April was the third slowest on record.) The latest chart of sea ice extent now shows that the current measurement exceeds even the record-setting pace of 2007.

As Herr Hare points out, however, that hasn't stopped the denialists from declaring the exact opposite.

Image (click to enlarge): Time series of Arctic sea ice extent as of June 9, from NSIDC
Posted by Steve Scolnik at 1:03 AM