Clear, mild. Halloween afternoon is spectacularly clear and mild in the Washington metro area; it's the 8th clear day of an historically warm month. Temperatures are generally in the upper 60s with a few 70s in the southern portion of the region. Dewpoints are slightly more humid in the 40s.

Clear, then increasing clouds, mild. Trick-or-treat temperatures will fall through the 60s this evening under clear skies to the upper 50s well after dark. Some clouds will develop toward morning with lows near 50° in the city to the mid and upper 40s in the 'burbs. Tomorrow will be partly cloudy with highs 67-71°.

For the outlook through the rest of the week and into the weekend, scroll on down to Josh's post below.

Tropical Storm Noel strengthened a little to a maximum wind speed of 50 mph as it emerged off Cuba's northern coast. It was stationary at 5pm, but is expected to begin a turn toward the north and northeast in the direction of the Bahamas. Meanwhile, wind advisories and gale warnings are in effect for the Florida coast because of the strong pressure difference between the storm and high pressure centered to the north, and a tropical storm watch has been issued at 5pm for southeastern Florida. Major beach erosion has already been reported in Florida from the persistent winds of the last several days. 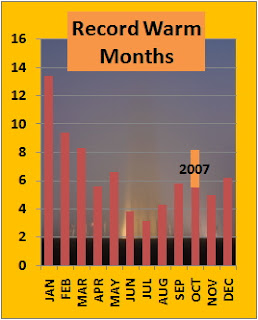 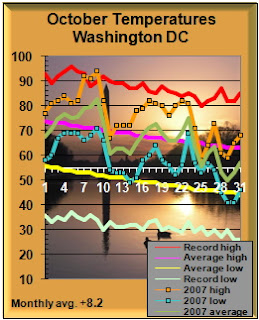 As Matt posted yesterday, this October is finishing by far the warmest in Washington history. Based on the high so far today of 68 and low this morning of 46, the month is on track to be 8.2° above average, or a staggering 2.7° above the old record set in 1984. Expressed in terms of departure from average, that makes this month the warmest overall for any month, April through December, in 137 years of records. The 8.2° departure is within 0.1° of the warmest March and cooler than only a tiny handful of the most extreme Januaries and Februaries. For the 30 days through yesterday, there have been 3 highs in the 90s, 12 in the 80s, 9 in the 70s, 4 in the 60s, and only 2 in the 50s.